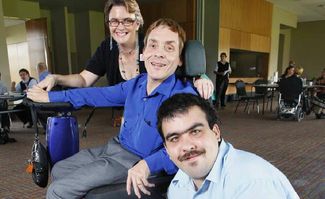 PEOPLE with disabilities are banking on more support and opportunities once the National Disability Insurance Scheme (NDIS) gets off the ground.

The initial stage of the NDIS will start in July 2013, a year ahead of the Productivity Commission’s timetable, in four select locations.

Even though the Federal Government has committed money in this week’s budget for the NDIS, disability advocates say the state governments must also come on board to make the scheme work.

She said the NDIS would remain an aspiration unless a commitment was made by the states.

“At the moment, so many people with disabilities aren’t sure they’re going to get out of bed in the morning,” Ms Vicary said.

“The NDIS will look at the person, what their aspirations are and the support they need.

“If people can’t get around their community, they require extra support.”

QDN Ipswich facilitator Peter Tully has more than a passing interest in the outcome of NDIS negotiations.

The 45-year-old IT business operator was born with cerebral palsy and had to buy his first wheelchair with his own money.

Mr Tully’s wife Linda has a slight disability and their son Nick Darby is intellectually handicapped and epileptic.

“What people don’t realise is that, at any point in their lives, anyone could have a disability,” he said.

“What we hope the NDIS will do is bring people with disabilities out into the community.”