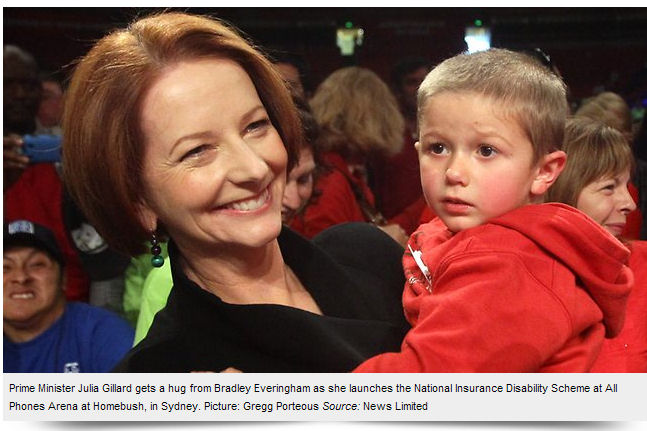 The new National Disability Insurance Scheme could benefit almost half of the Ipswich population, according to a regional facilitator.

Queenslanders with Disability Network Ipswich regional facilitator Peter Tully said the NDIS would benefit elderly residents, mentally challenged people and the physically disabled numbering about 85,000 from a population of 175,000.

Prime Minister Julia Gillard announced earlier this week that the Medicare-style NDIS, worth about $8 billion annually, would streamline services for people with disabilities, for their parents and carers, and for service providers.

Ms Gillard said that under the scheme, severely disabled people would have care needs assessed by a government agency and it would decide on the level of financial support they require for life.

Mr Tully was among about 40 people to attend an information morning tea at the North Ipswich Corporate Centre on Wednesday to hear more about the NDIS and what it means to the Ipswich community.

“My role will be to help to get information out to the people so that they know where to get services and what will make their lives easier,” he said at Ipswich City Council-sponsored morning tea.

“It’s just not about me in a wheelchair. It’s about the elderly and the mentally ill.

“Anybody could have a disability at some time in their life.

“It’s not just physical, it could be mental or emotional.”

“For me NDIS will mean new goals for people with disabilities,” said Mrs Tully, who met her husband when she was a Maxi Taxi driver.

“It’s about disabled people doing something for themselves.

“To get them out of their homes and to open up services available to them to get out of the house.

“I know a lot of people out there are trapped, unable to get out of bed in the mornings, because they don’t know about the services out there.”

NDIS advisory group member Fran Vicary was on hand at the information session to answer questions about the scheme.

Some of the concerns she heard were about the duplication of services, parents and careers not finding adequate assistance, a lack of community understanding about caring for people with disabilities, and enabling disabled people to have a choice about decisions about their futures.

“The NDIS helps put plans in place so that people can have dreams,” she said.

“We need to break down the stereotypes of people with disabilities not working.”

She said the NDIS would not replace disability pensions or carer allowances. She also urged State Governments not to decrease the funding of disability services because of the Federal Government’s NDIS.

“It will take all levels of government to help the disabled with services,” she said.

Federal Member for Blair Shayne Neumann said the NDIS would start in select locations in 2013.

“This is great news for local people with disability and their carers. There is strong support in our community for this vital reform, and people are thrilled that the Federal Labor Government is getting on with the job of building the NDIS,” he said.

“The Federal Government will fund its fair share of the cost of the initial stage of the NDIS in the upcoming Budget. The initial stage will cover about 20,000 people with profound disability from July 2014.

“The launch will commence in the middle of next year – a full year ahead of the timetable set out by the Productivity Commission.”

Mr Neumann said the current system “wasn’t delivering the kind of care and support that Australians expect for people with disability and their carers”.

“People with disability, their families and carers tell me they are tired of waking up every day to a broken system that doesn’t respond to their needs, and doesn’t give them choice or control,” he said.

“People with disability have waited long enough for change. They’ve come together to tell us in one voice that it’s time to make an NDIS real, and we’ve heard their call.”

Mr Neumann commended the work of Mr and Mrs Tully.
“Peter and Linda have been incredible advocates for the NDIS and for those living with disability generally in the local area,” Mr Neumann said.

“They have shown me just how important it is to have a well funded, consistent system that will ensure that those living with disability and their carers are well looked after for their whole lives.

“This is about ensuring a fair go for all people living in Ipswich and the Somerset Region and I am proud to be part of this significant reform.”

For more on the NDIS, visit www.ndis.gov.au